The One Where Zach’s Eyes Lighten and Look Like Mine, Sort Of

My eyes were a masculine light green when I was little.  They weren’t as nice as Jean or Jake’s baby blues, but they were unique.  Everyone who saw me would’ve said I had nice eyes, if only both eyes pointed in the same direction.  I had an astigmatism and amblyopia.  That means I had a lazy eye, which was fitting because I was lazy.  My left eye looked straight and my right eye looked in toward my nose.  I was focused and introspective at the same time.  I told the daycare kids that I was special because I could look at two things at once.  When I saw both images though, I got a headache, because I was special.

Me: Focused and Introspective

I had a couple of surgeries to move the lazy eye over.  The first moved the eye too far and the second brought it back so it kind of looked straight.  Then I got thick glasses so I could see the ladybugs on the blades of grass.  To complete the ensemble, I got a patch for the left eye to strengthen the right.  In whole, I was a pirate with one good looking, albeit weak, green eye. 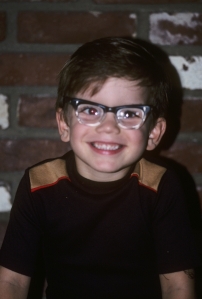 I took the patch off for the picture.

And so I’ve been worried about Zach’s eyes since he was in utero.  I prayed for strong clear eyes with plenty of depth perception and personality.  We had three sonograms and his eyes were closed in every one.  I prayed he would get my nice eyes and mom’s nice skin.  And he came out awake and opposite:  blue skin and brown eyes.  Alas.

“No, Jim,” they responded, “Zach’s eyes are nothing like yours, they look the same direction.” 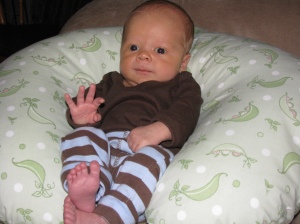 The stories herein are about a sentimental 80s child who cried at every showing of ET (the sad part where he was lying in the wash) and his families, then and now. His wife, son, parents, and siblings play their parts well. They have their exits and their entrances. Sometimes their exits are sad, but not as sad as ET.
View all posts by Jimmy →
This entry was posted in fatherhood, Life, Nostalgia, Uncategorized and tagged blue, childhood, eyes, fatherhood, glasses, green, lazy eye, Nostalgia, patch. Bookmark the permalink.

2 Responses to The One Where Zach’s Eyes Lighten and Look Like Mine, Sort Of