The One Where Zach Went to His First Professional Baseball Game

When I was younger, I went to two or three major league games at Dodger Stadium a year.  Every so often, dad would come home and tell us that he got some extra tickets to the game.  My heart caught a little:  a major league game!  With the Dodgers infield:  Steve Garvey at first and Davey Lopes at second and Bill Russell at shortstop and Ron Cey at third.  Dad was from St. Louis and mom was from San Francisco, so we weren’t allowed to root for the Dodgers, but I liked those guys on the inside.

Through all those years and all those games, the manager, Tommy Lasorda, never asked me to fill in.  The tickets got better and we sat closer and the foul balls were a real possibility as Davey Lopes turned into Steve Sax and 1981 turned into 1988, but I never got a foul ball.

And yesterday.  Zach and Mom and Dad and Kris and I went to the Wichita Wingnuts game.  AA baseball.  The field looked amazing.  A little too amazing.  Dad commented on the crisp color of the grass and the perfect dirt.  “It almost looks like Astroturf,” he said.

I stared at it for an inning while mom and Kris got hot dogs.  “I think the dirt is carpet, too!” I said.  As soon as Kris finished eating her dog, we went to explore the first base line.  There was a low fence there.  I bent over and sure enough, it was carpet!  I smirked and waved to my folks while shaking my head in baseball-purist disgust.  Imagine a minor league field with not only fake grass, but fake dirt to boot!

Kris and I waited for the half inning to end.  The Kansas City T-Bones were up.  The left handed batter hit a dribbler toward the first base coach.  The coach bent down and the ball squirted right by him.  I laughed.  A major league first base coach would’ve caught the ball.

The coach trotted after the ball and looked for a little kid to throw it to.  But there weren’t any.  He looked at me.  I held up my hand.  And well… 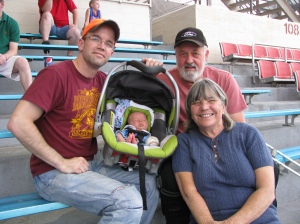 Check out what Zach's holding! He got a foul ball in his first professional game. He's quite the athlete!

The stories herein are about a sentimental 80s child who cried at every showing of ET (the sad part where he was lying in the wash) and his families, then and now. His wife, son, parents, and siblings play their parts well. They have their exits and their entrances. Sometimes their exits are sad, but not as sad as ET.
View all posts by Jimmy →
This entry was posted in Baseball, Life, memoir, Nostalgia and tagged baby, baseball, bill russell, caught, davey lopes, foul ball, glove, ron cey, steve garvey. Bookmark the permalink.