Zach had a doctor’s appointment less than a week after he was born.  They weighed and measured him and came back with his percentile score:  4.

4th percentile, hmm.  I never was much into science, but when Kris first told me she was pregnant, I thought there might be a chance the child could get some of my genes.  I thought back to my first day of school when I learned I was small.  Not just small, the smallest.  And I remained the smallest, all the way into my sophomore year in college.

4th percentile. My genes at work.

Time hurried through two months of life and visitors and giving to the boy.

And the boy had his appointment.   I got off work just in time to football hold him for his shots.  He got some shots in each thigh and cried for a few seconds:  he got her pain tolerance genes.

And then the weigh-in.

Zach was born three weeks early.  His first weigh-in, and 4th percentile score, wasn’t fair because he was being compared to full term babies.  With each successive weigh-in, I expected him to be up to the size of normal babies.

My runty genes were sure to skip a generation, so Zach was probably in the 60th percentile or so by now and would end up in the 75th by his six month appointment.

His clothes came off.  And onto the scale he went.

The weight came up in kilograms.  I did some quick math.  At four pounds a kilogram, my boy was probably pushing 20 pounds at just ten weeks old!  That was 80th or 90th percentile territory.

The nurse typed some numbers into her computer.

“What percentile is he?” I asked, excitedly.

I dressed him and took him home.

And the boy gave me a laugh with a future in it. 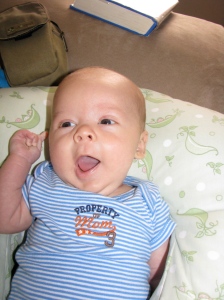 My genes. My boy.

The stories herein are about a sentimental 80s child who cried at every showing of ET (the sad part where he was lying in the wash) and his families, then and now. His wife, son, parents, and siblings play their parts well. They have their exits and their entrances. Sometimes their exits are sad, but not as sad as ET.
View all posts by Jimmy →
This entry was posted in fatherhood, Life, Nostalgia and tagged babies, milk, percentiles. Bookmark the permalink.

7 Responses to Ten Weeks, Percentiles, and a Laughing Boy