We drove from New Jersey to Charlottesville because we like toll roads.  And this trip didn’t disappoint.  Long stretches of picturesque highway are broken up by more picturesque toll booths all up and down the east coast, which is convenient if you have a sleeping baby.  I smiled as I handed over my four dollars and the toll booth lady smiled at the screaming baby who had just enough time to doze off before the next toll booth.

But we made it in time for the heatwave and to visit the presidents’ homes.

I love the presidents.  I collected the presidential stamps when I was five.  I learned them all in order:  from 1/2 cent Ben Franklin to 5 cent Christopher Columbus.  When I was much older, five-and-a-half, and learned that not only presidents were on stamps, I went to an up-to-date school book.  I memorized them again.  I looked up factoids about their lives and wives.  Gone was Ben Franklin, in came Franklin Pierce.  Presidents didn’t have names like Christopher.  They had stately names like Rutherford, Ulysses, and, most of all, James.

The James presidents became my favorites and I studied them harder, learning about their wives and vice-presidents.  Six out of the 40 presidents were named James.  Because I was accelerated in math, I could figure out that I had a three in 20 chance of being president.  I counted and there were only two other Jimmys in my class, so I smiled.

When Kris asked me what I wanted to do in Charlottesville, I smiled again.  Montpelier and Ash Lawn:  the homes of James Madison and James Monroe.  You can tell they were important because their houses have names.

We walked into Montpelier.  I was eager to impress my family with my knowledge of Madison.  I told Zach how Madison was the 4th president and once on a $2 stamp. 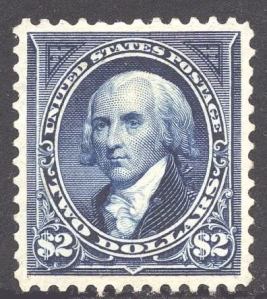 Then I let the tour guide take over.  We learned that Madison was 5’4″ tall and wrote the Constitution.  Zach looked at me questioningly.  I told him I was 5’8″ and I write this blog, so we’re pretty much equals.  He sighed his Zach sigh, proud of his dad, and went back to sleep.  We left Montpelier before any more difficult comparisons arose.

On to Ash Lawn.  We were thirty seconds into the house when the guide told us Monroe was 6′ tall.  I turned the stroller around to let Zach enjoy the combination 98 degree/ 98% humidity day.  Zach and I talked about history, house names, and the need for a family stamp collection.

Zach, in front of Ash Lawn

Kris came out and we snapped some final family photos in Charlottesville and then decided it was about time we headed back to our home in Kansas, Wind Dirt.

The stories herein are about a sentimental 80s child who cried at every showing of ET (the sad part where he was lying in the wash) and his families, then and now. His wife, son, parents, and siblings play their parts well. They have their exits and their entrances. Sometimes their exits are sad, but not as sad as ET.
View all posts by Jimmy →
This entry was posted in 2nd Grade, fatherhood, Life, memoir, Nostalgia, Uncategorized and tagged Ash Lawn, Charlottesville, James Madison, James Monroe, Montpelier. Bookmark the permalink.