I am terribly un-artistic.  I took sewing in 8th grade because I couldn’t talk to girls and my 6th grade teacher told me some boys take that class just to meet girls.  Everybody had the same 6th grade teacher and there were only two girls and 26 boys.  I sat next to one of the girls, but was afraid to talk to her all year.  I did make a deformed He-Man pillow and an orange pin-cushion that couldn’t hold pins.  It was the best art project I ever made.

In 1953, my 10-year-old father got on his red-fendered paper route bike and bought a new $3.95 baseball glove:  A Bob Feller JC Higgins edition from Sears.   It had grommets, strong strings, and a button which opened and closed a flap of thin leather so he could slide his hand in.

He oiled it that night and put a baseball in it.  He played in his first game of the season the next day.

I first heard about the glove when I went into a slump in the fourth game of 1984.  We were playing the Giants, Kenny was on third.  I squinted my eyes, stepped into the first pitch, and swung as hard as I could.  The ball hit me in the stomach and I crumpled as the ball forced the breath out of me.  I struck out.

For the next two weeks I was afraid of the ball both in the field and at the plate.  I hoped the other team didn’t hit the ball to me.  My confidence spiraled downward.  My kickball skills at school diminished.  I was afraid to talk to Monica.  I was in a funk.

Dad told me bedtime stories of home runs hit and line drives and unassisted double plays gobbled up.  His glove was close to a magic vacuum, sucking up ground balls and errant throws to first base.  On good days, he kept a baseball in it at night.  On days when he made an error, he punished it for missing balls and the glove went to bed empty.

A high pop fly came toward him.  As the ball was coming down, he heard a loud crash.  A crop duster crashed in the field next to where he was playing.  He saw the pilot.  He caught the ball.  And then saved the pilot.

Time and his stories eased my fears.  I hit a grand slam in my baseball game and my kickball skills came back.

I asked for more stories about his glove.  He oiled it after every season.  He used a bobby pin to re-string it after catching vicious bullets.  He used it for three years and had twelve years worth of stories.

The stories germinated.  Within two dozen years, I was able to talk to girls again.

Zach and I found dad’s glove on our last trip back to California.  The strings were broken, there was no ball in it, but it was well-oiled.  I put it in our treasure box and brought it back to Wichita. 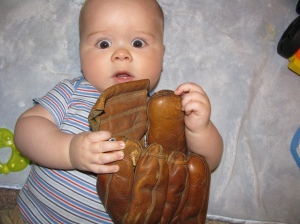 I took to relacing it.  I bought a kit at the sporting goods store, but the lace standard increased from 1/8″ to 3/16″ sometime in the 70s (the 70s ruined everything) and I couldn’t get the laces through the grommets.

I ordered special leather lace, dark like the lace that my dad used.   Kris and I sat on the couch and threaded the glove.  I showed off my sewing skills.  So as not to mess it up, she put the needle through the grommets and I pulled it through. 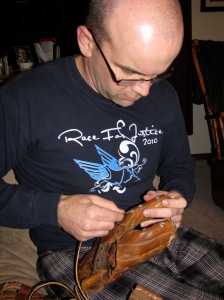 Relacing the glove with the special lace.

I took it out in the yard and played catch.  The glove smacked pleasingly each time the ball hit it.  I told Zach about the plane crash. 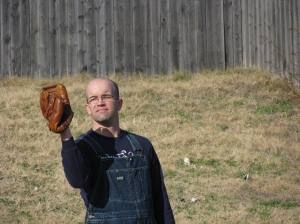 The glove squealed the first few times I caught a ball. It was the first time it had been used in 55 years.

And I prayed for left-handed children.

The stories herein are about a sentimental 80s child who cried at every showing of ET (the sad part where he was lying in the wash) and his families, then and now. His wife, son, parents, and siblings play their parts well. They have their exits and their entrances. Sometimes their exits are sad, but not as sad as ET.
View all posts by Jimmy →
This entry was posted in Baseball, Elementary School, fatherhood, Life, memoir, Nostalgia and tagged baseball glove, bob feller, dad, glove oil, jc higgins, restringing a baseball glove. Bookmark the permalink.