I began Nobel Junior High in the fall of ’87 and a few things changed:  math got harder, girls stopped talking to me, and lunch went from 50 cents to $1.25.

I was a little upset that my grades went down, a lot upset that kickball skills no longer equaled popularity, and ecstatic that my allowance went up 75 cents a day.

I starved myself each day and went from being a baseball card collector to a baseball card investor.  Rookie cards were hot that year and I spent upwards of $6 a week on sets with Jose Canseco, Wally Joyner, Pete Incaviglia, and Bo Jackson.  I dreamed my collection was going to be worth six or eight figures by the time I went to college.

Toward the end of ’87, after reading baseball card magazines and pack inserts, I discovered a mail order set.  12 glossy cards, all rookies.  One dollar a set now, worth at least ten times that by next month.  Taking postage and handling into consideration, the sets were still cheaper if I ordered them through the mail.  I gave dad cash for a check of equal value and I ordered my first set.

These are the cards that came in every pack of ’87 Topps. Jake and I filled out tons of these cards, you needed six to order one set of glossy cards. The six to eight weeks delivery time is listed in the fine print.

My school grades went even lower.  Girls continued to ignore me.  I raced home day after day to check the mail.  I held my breath as I opened the mailbox.  I opened my eyes.  Nothing.  Day after day.

I drew big ‘Xs’ on the calendar after each mail delivery, more certain each day that the cards would be delivered tomorrow and I would impress my brother and my friends and maybe even a girl or two with my glossy, valuable rookie cards.

As the six week mark came and went, I became disheartened.  My cards were surely lost in the mail.  Yet each day I checked, hoping against hope that they’d be delivered.  And each day I sighed at the injustice of life.

Just after Christmas 2011, my wife came to me as I was playing with our eight-month old on the floor.  She sat down next to me, giddy.  ‘Babe, there were two lines!’  I kissed her.  Pregnant again.  And I’ve been waiting the intervening nine months.  Six to eight weeks took forever when I was in seventh grade.  Waiting nine months now is unfathomable.  I’m convinced this baby is never coming.

Eight weeks and two days after I sent my order, dejected and sad and resigned that I would fail math, that no girl would ever talk to me, and that I would never be able to pay for college; I dragged myself to the mailbox.  I yanked it open.

And there it was.  A small box, addressed to me.  I gasped and leaped and squealed.  I tore the box open as I ran to the house, yelling, ‘They came, they came!’

They were gorgeous and clear, smelling of lacquer.  I slid them into my album and showed my whole family.  I took them to school and thought myself envied.  I raised my math grade to a ‘D’ and a girl sneezed in my general direction.  Life was right again.

Those same cards are sitting upstairs today.  In a box, next to tens of thousands of others.  The remnants of years of lunch money today are, collectively, almost worth three figures.

And each hour I ask my wife how she’s feeling, whether she wants to go to the hospital.  And forty weeks for a delivery is still unfathomable. 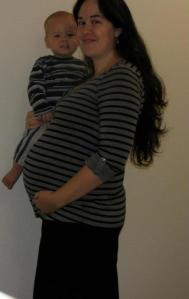 The stories herein are about a sentimental 80s child who cried at every showing of ET (the sad part where he was lying in the wash) and his families, then and now. His wife, son, parents, and siblings play their parts well. They have their exits and their entrances. Sometimes their exits are sad, but not as sad as ET.
View all posts by Jimmy →
This entry was posted in Baseball, Life, memoir, Nostalgia and tagged Baseball Cards, bo jackson, donruss, fleer, jose conseco, kevin mitchell, pete incaviglia, topps, wally joyner, will clark. Bookmark the permalink.