I gasped when Mrs. Peskay held out an example of our 3rd grade Mother’s Day projects that year:  we were going to glue macaroni shells to an empty tissue box and spray paint them silver.  It was just what mom needed!

Each Friday after lunch for three weeks we labored at the project.  Kids came up with great designs for their shells.  I sneaked peeks at Robbie’s to see what a good one would look like.  It was all curves and symmetry.  I came up with the idea (after seeing Scott’s) to make my shells in the shape of ‘Mom’ (in cursive!).   Everybody else was almost done when I decided on the design.  I rushed.

I got far more glue on my fingers than on the box.  I put some shells upside down.  I gave the second ‘m’ in ‘mom’ an extra hump.  Mrs. Peskay had already painted everybody else’s box and was waiting for me.  I covered the top of the box in glue and put on as many shells as I could.

Mom opened our presents that year and we all got thanked.  Mine was the only one that received the special ‘Oh dear’ upon opening.

Mom displayed Jeannene’s lame pot on the mantel, but my tissue box got a special spot in her drawer, close to where she slept.

That was 1983.  My art skills have declined with each passing year.

You can imagine my delight when this year my wife asked for a dining room table and I agreed to put it on my list of resolutions.  I told my dad, a connoisseur of my Father’s Day gifts, and he told me the story of the time he had to drive a guy to the hospital after he used the table saw.  Dad had four of the guys fingers in his pocket.

I gulped, took a deep breath, and found this plan on Ana White’s site.  The plan says it will take about 25 hours to finish.  I plan on working on it each week.  I’ve set a goal of finishing it by July, just under the 150 hour mark.

Zach’s going to help.  This week, we began. 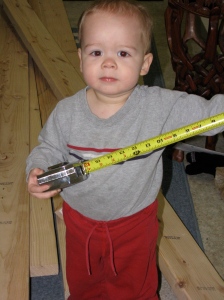 I bought most of the wood for the legs at Lowe’s.  We measured twice… 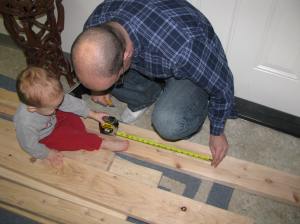 Check out those 45 degree cuts!  I spent about three hours on this so far.  I made one mistake, cutting up my lone 2″x6″x10′ board instead of leaving it whole for the center brace.  I’ll have to go buy another.

So far though, I’ve got all my fingers and next week, I’ll look at making the final cuts to the legs and sanding down the wood.

I hope the finished project looks at least as good as mom’s tissue box.

The stories herein are about a sentimental 80s child who cried at every showing of ET (the sad part where he was lying in the wash) and his families, then and now. His wife, son, parents, and siblings play their parts well. They have their exits and their entrances. Sometimes their exits are sad, but not as sad as ET.
View all posts by Jimmy →
This entry was posted in Elementary School, Life, memoir and tagged Building a dining room table, Dining Room Table, Do it yourself, making a dining room table, wood working. Bookmark the permalink.

6 Responses to Pressing Forward on the Resolutions: Table Part 1